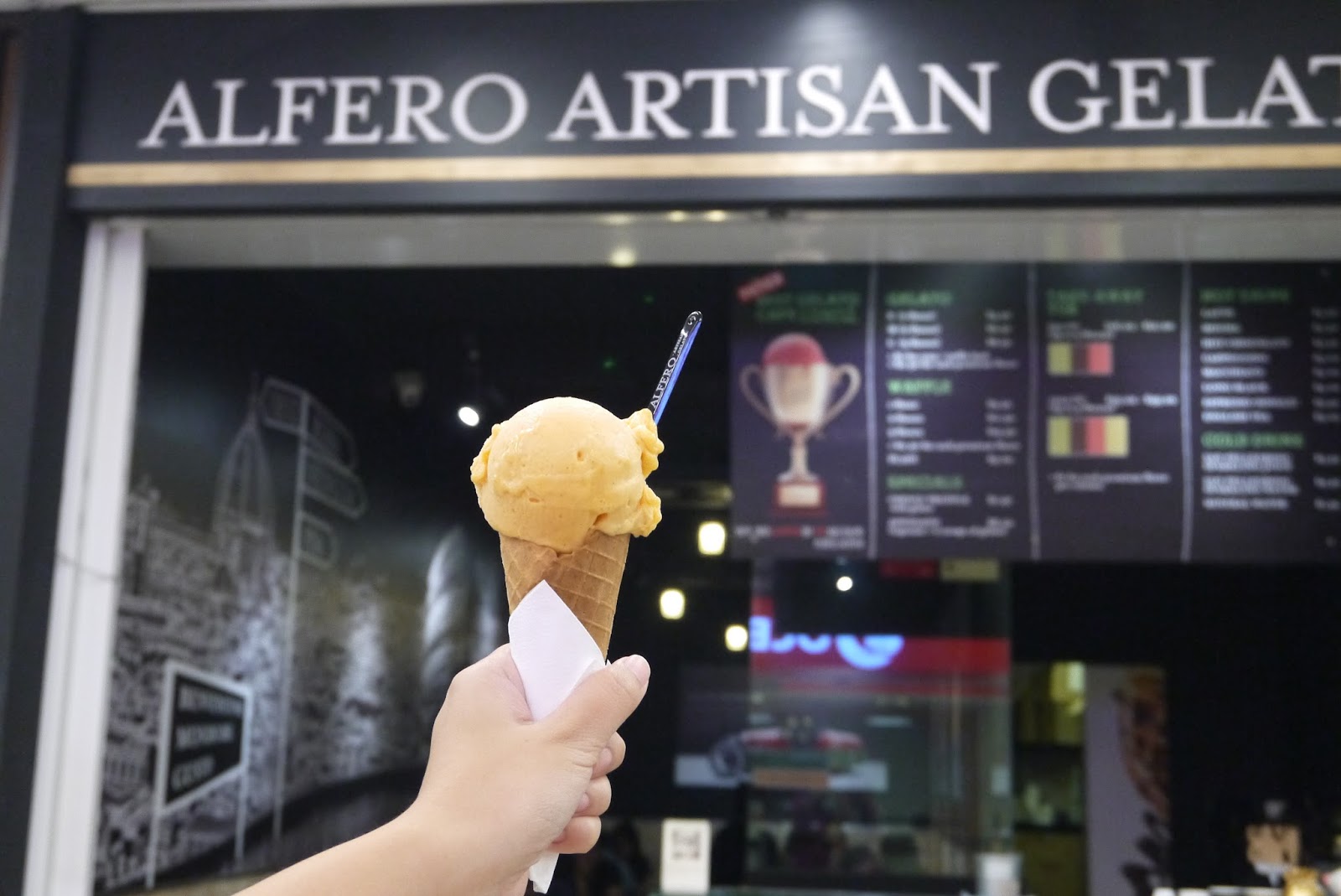 When talking about Gelato, your mind must be flying into Italy. I still remember during our honeymoon trip to Venice and Rome 2 years ago, even though it was freezing outside due to winter but we still enjoying our gelato everywhere.

Yes, Gelato is Italy’s version of ice cream, but gelato have three major differences with ice cream.
* Gelato has significantly less butterfat than ice cream. However, less fat does not mean less taste. With the lower butterfat content, gelato is less solidly frozen than ice cream and melts in the mouth faster.
* Gelato has a much higher density than ice cream. Ice cream is produced by mixing cream, milk and sugar, then adding air. Manufacturers add air to ice cream because it nearly doubles the quantity of their product. But, it cuts their quality in half. No air is added to gelato resulting a higher quality dessert with a richer, creamier taste.
* Gelato is served slightly warmer than ice cream. Because it is less solidly frozen, gelato’s taste is further enhanced as it melts in the mouth.

And don’t fret over the calories. Why? Here you go: 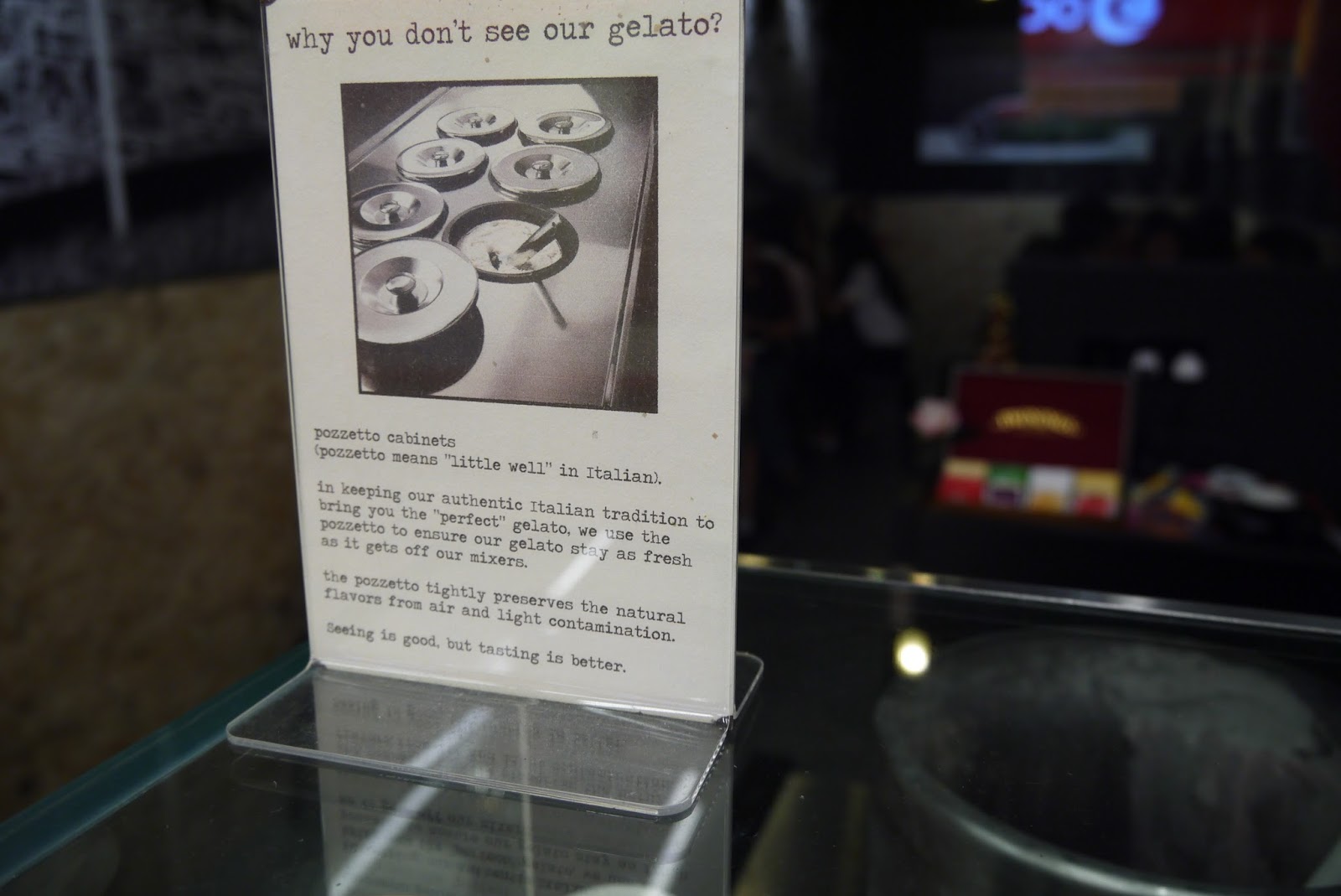 96% FAT FREE ITALIAN GELATO! Things just got more exciting in food haven Singapore, with Italian-born  Marco Alfero bringing his artisan gelato with such low fat into a market in need of authentic and delicious Italian gelato.  After all, they don’t call him artisan for nothing!
About ALFERO GELATO
When it comes to making the signature Alfero Gelato, there are no shortcuts to it. While other ice cream-makers may take the quick and easy route, which affect the taste and quality of their products, Marco is fearless and unapologetic of the time and effort required to make a single tub of gelato so that you can be sure of its mind-blowing taste and creaminess.
Alfero Gelato, as strictly administered by Marco himself, is made using premium ingredients imported from Italy and each process of the gelato-making is done painstakingly without missing a step. This ensures the smooth and tasty texture of each scoop of Alfero Gelato, just the way it is meant to be as taught by the university.
The finished gelato is then stored in pozzettos which are only opened briefly upon serving, so that air and light do not affect the quality of the product.
Once again, Alfero Gelato is the first cafe in Singapore to use this century-old method of storing gelato, to ensure an extremely smooth, chewy and unmistakable taste in each bite of this truly Italian treat.
Spoil yourself with a variety of classic Italian treats such as the best-selling Pistachio and Bacio (meaning “Kiss” in Italian – an amorous combination of chocolate, milk and hazelnut), as well as interesting local flavours such as mango and durian (an Italian man making durian gelato? You bet it’s gotta be awesome!). 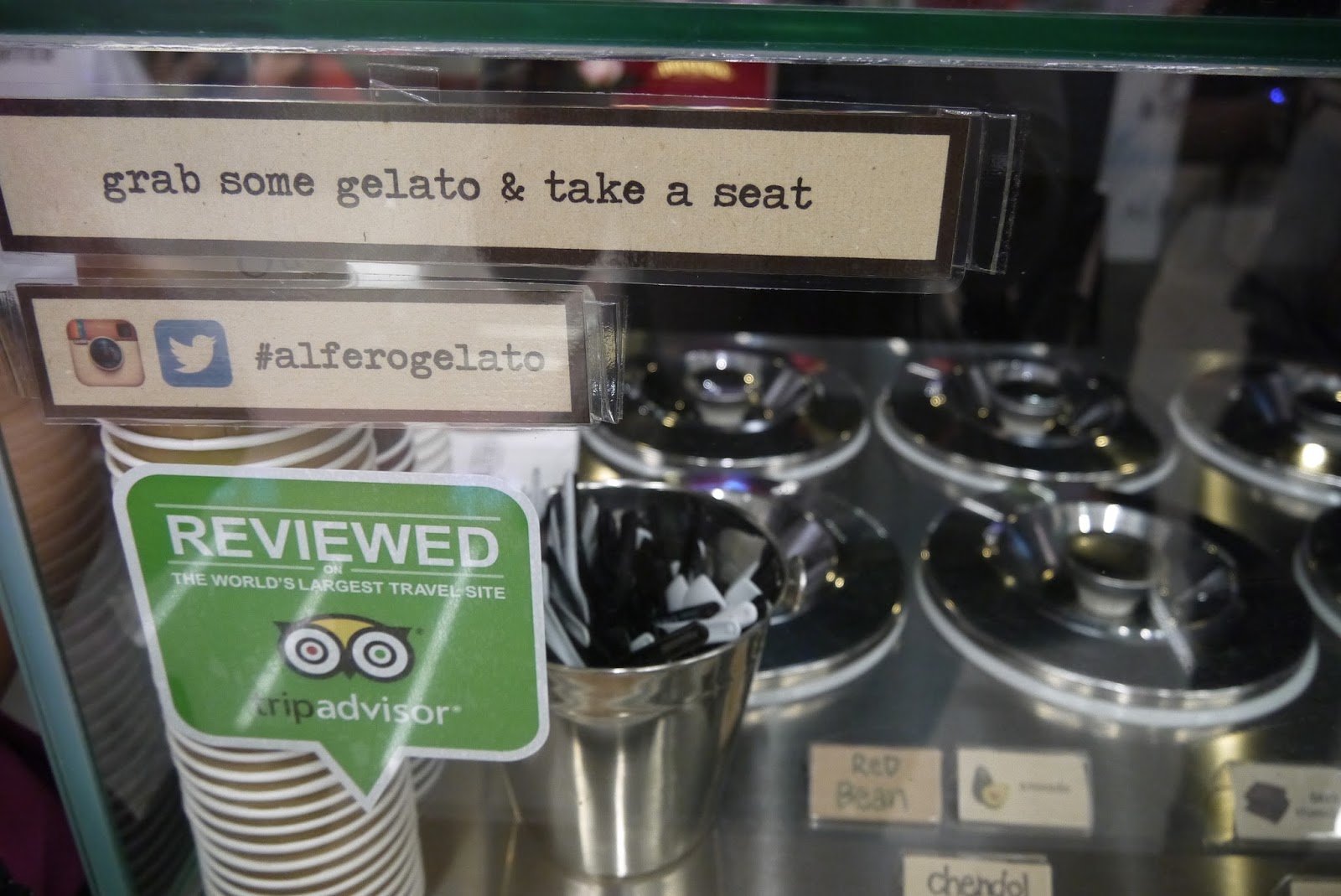 It’s a good invasion of sorts! And it’s about time too! Do you think Singapore needs truly tasty and authentic Italian ice cream, even when you think we’re already spoiled for choice? Well, we certainly do! And so does Marco Alfero, who came from Turin, Italy to Singapore in October 2009 to deliver us “il paradiso” (“heaven” in Italian).
Made using only the finest quality ingredients imported from Italy and other parts of Europe, Alfero Gelato is stored in pozzetto cabinets where exposure to light and air is greatly reduced, thus ensuring the smoothness and quality of the ice cream. Marco believes in serving only the best-tasting gelato to his customers, which is why he is the only man in Singapore who keeps his gelato covered while on display (unlike other ice cream cafes which display their products in full glory while compromising on taste and texture of their creams).
This brave move and unique concept will certainly delight customers, as the difference is certainly unmistakable and almost impossible to miss. One taste of Alfero Gelato, you’d never want to keep it uncovered again. 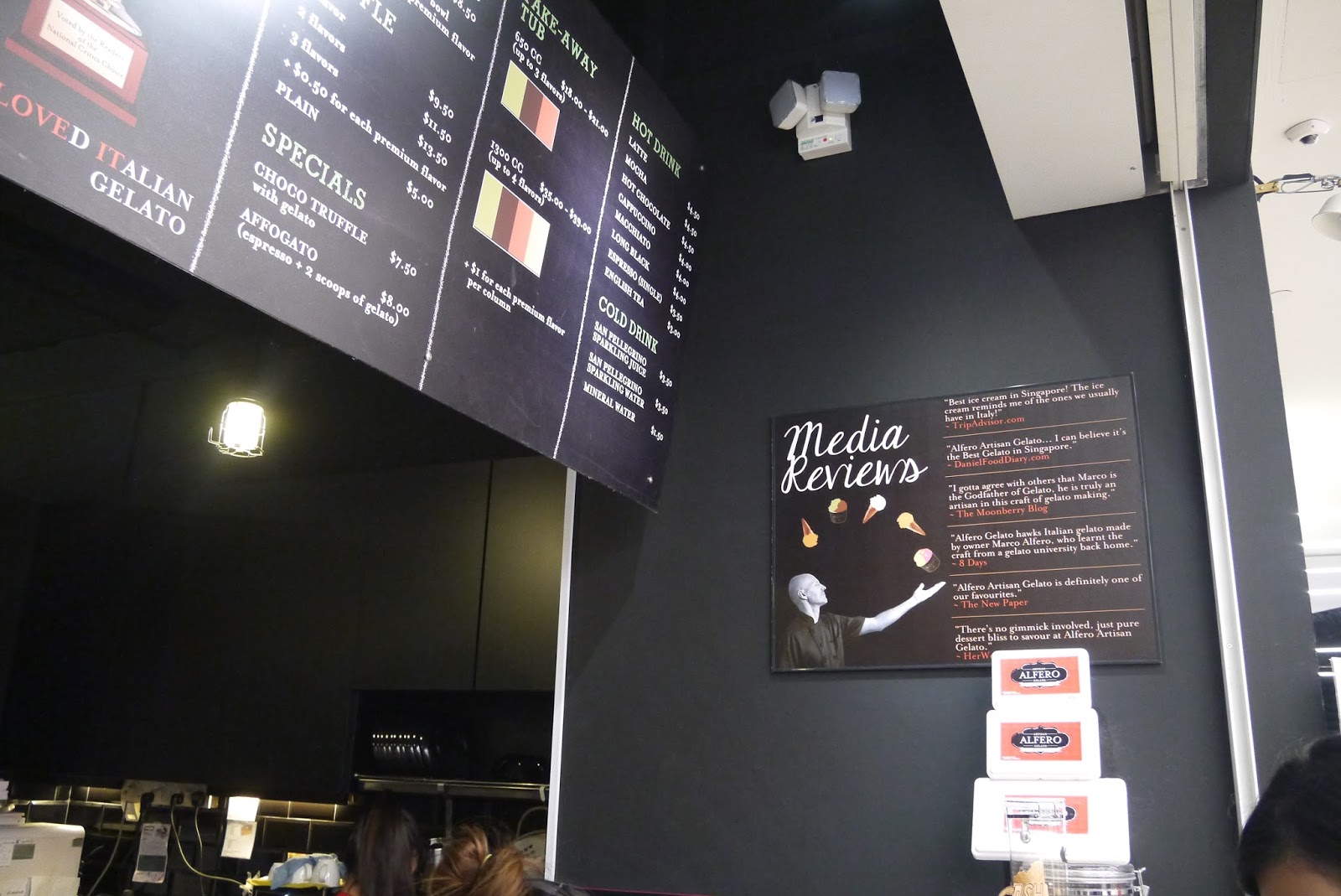 So, i have a chance for tasting at Alfero Artisan Gelato Orchard Gateway Branch. The stall not too big and just nice with semi industrial deco and black wall. When we visit the stall, it’s pretty packed, but it’s ok, you can always have the seat when you come. 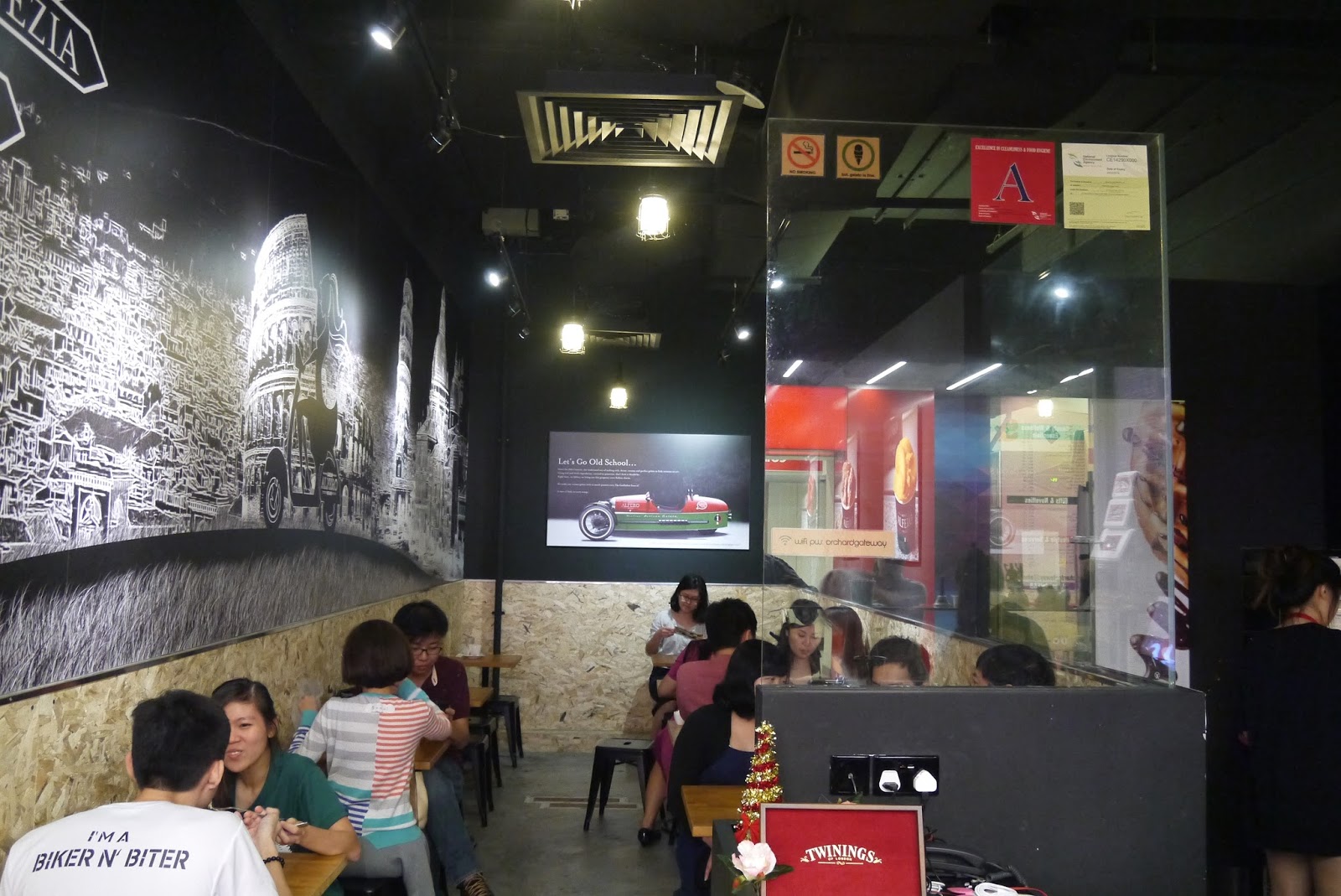 So you can choose the way to serve your gelato. By cups, by cone or with waffle, subject to your preferences. 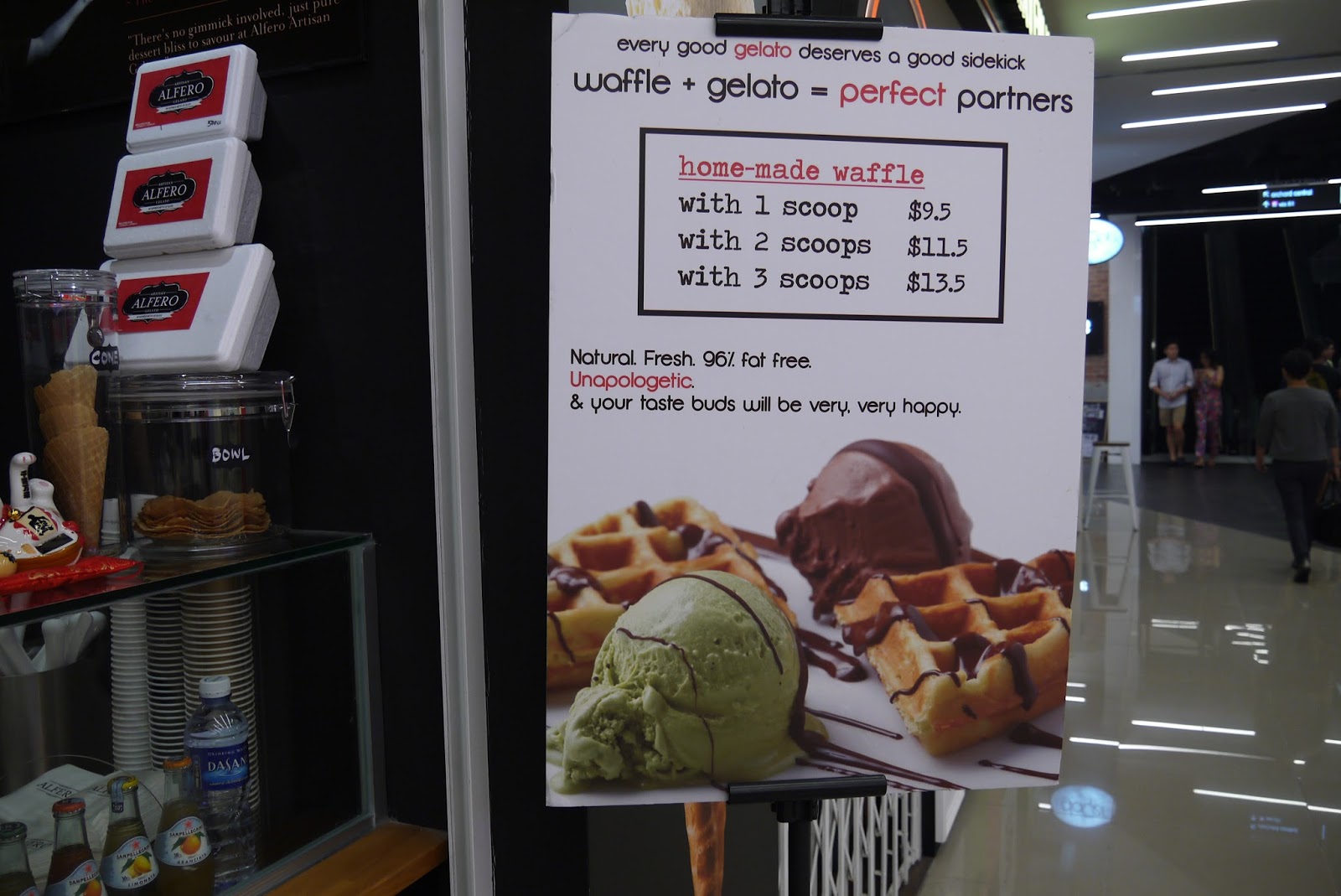 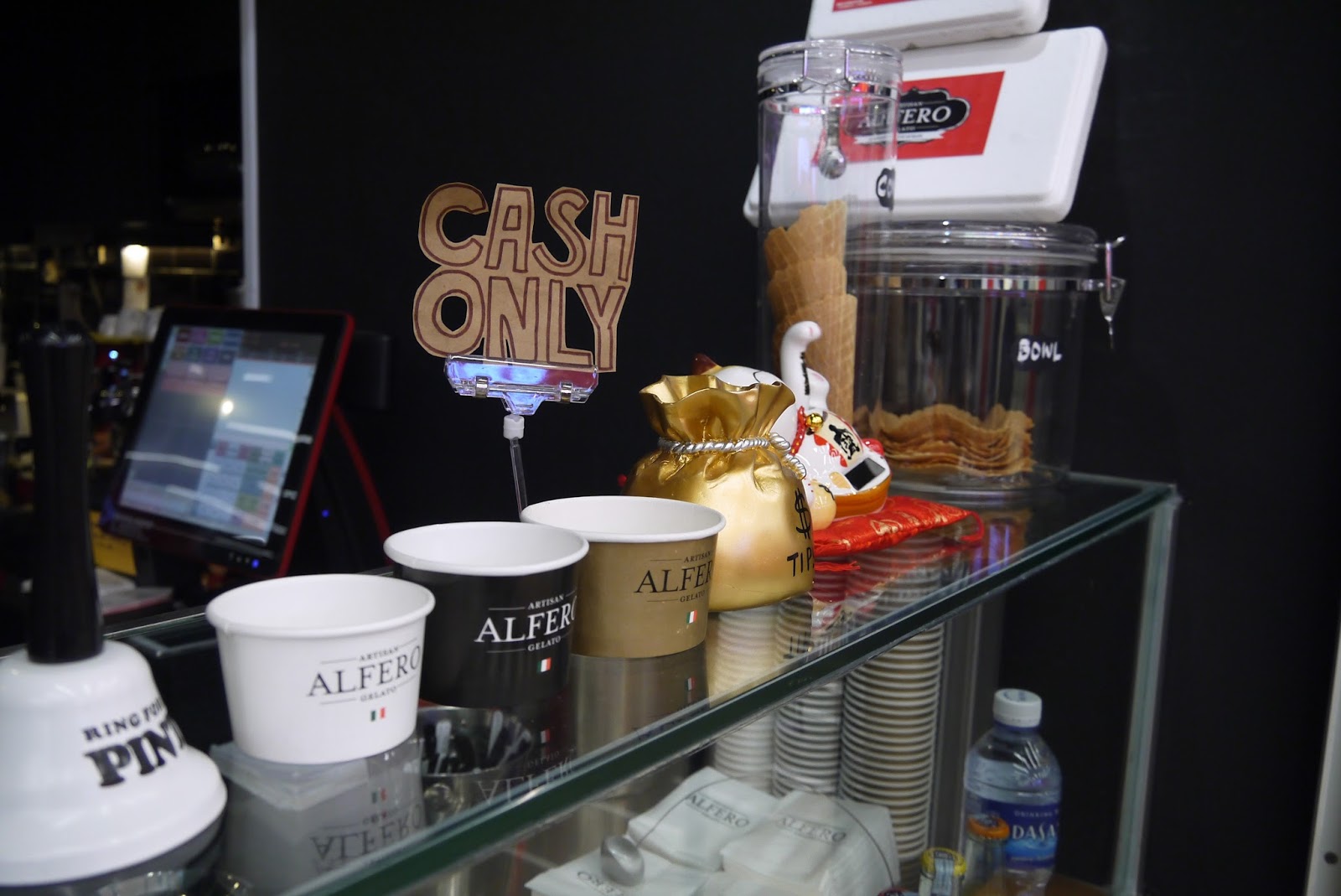 You can have tasting before you purchase your gelato. Try to taste the light (fruit base) flavour first before you try those creamy ‘heavy’ flavour. 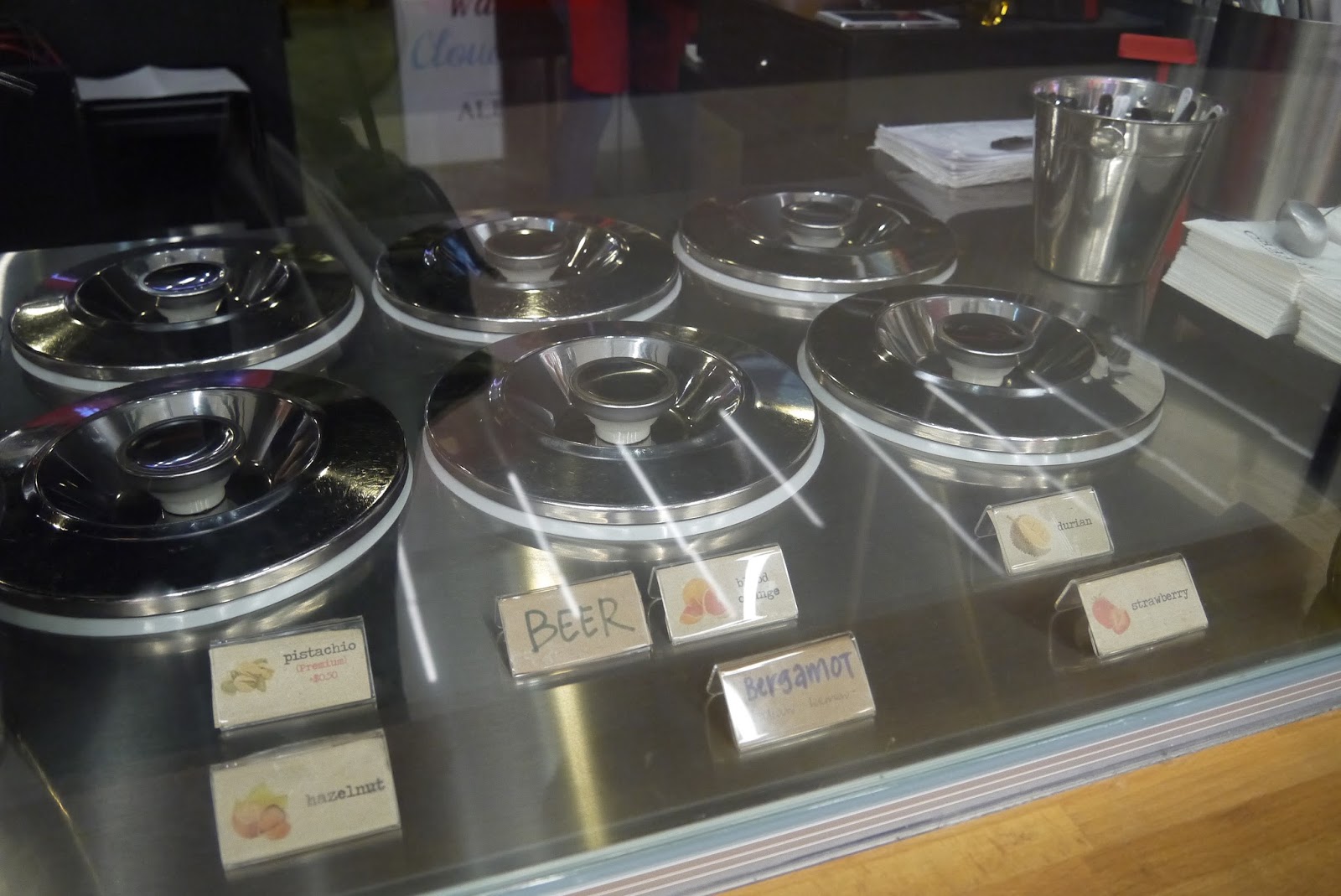 Frankly speaking, all pretty yummy in my opinion. But for sure have some favourite flavour, so here they are.. 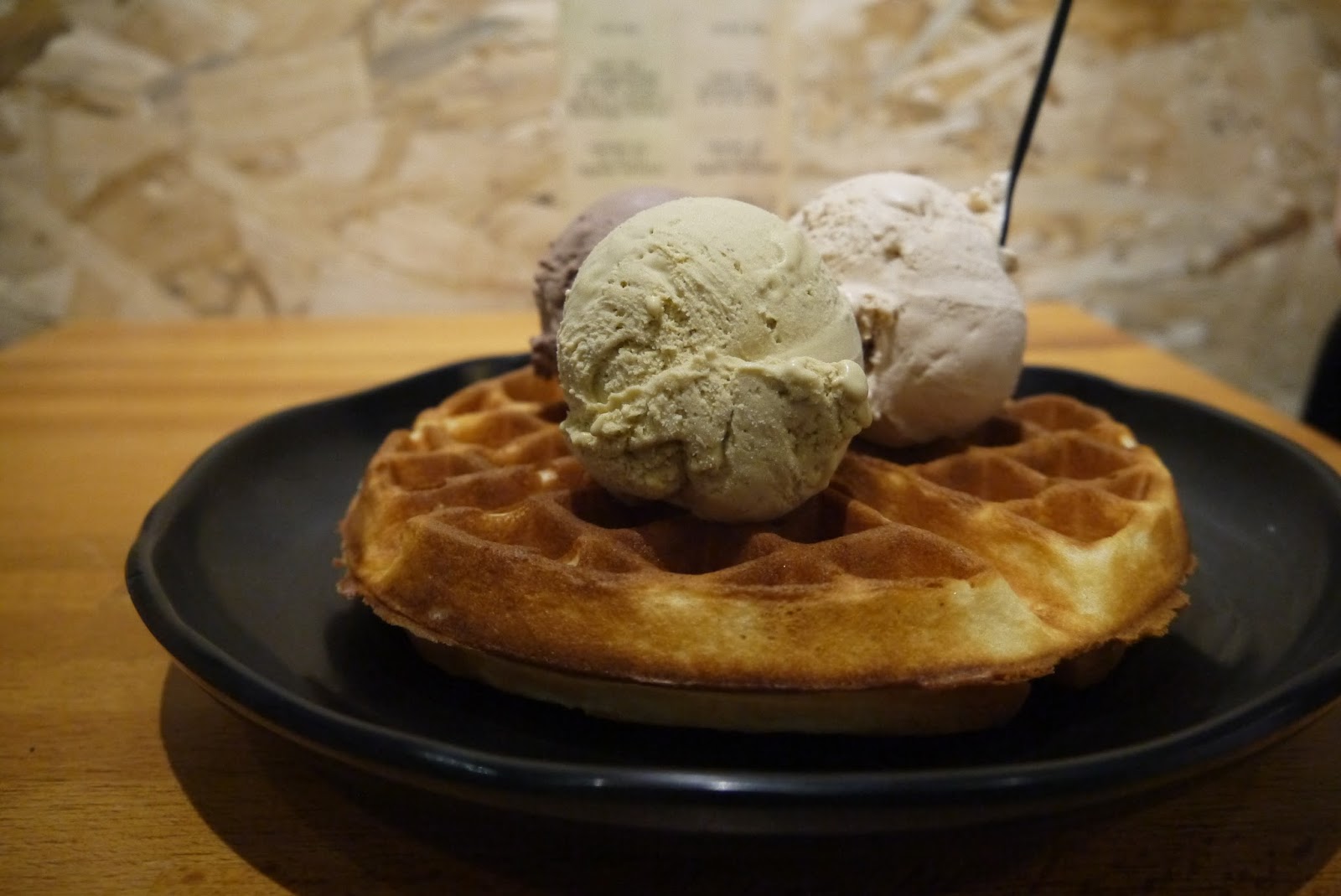 We asked them to serve creamy gelato on the waffle, because they are match really well. 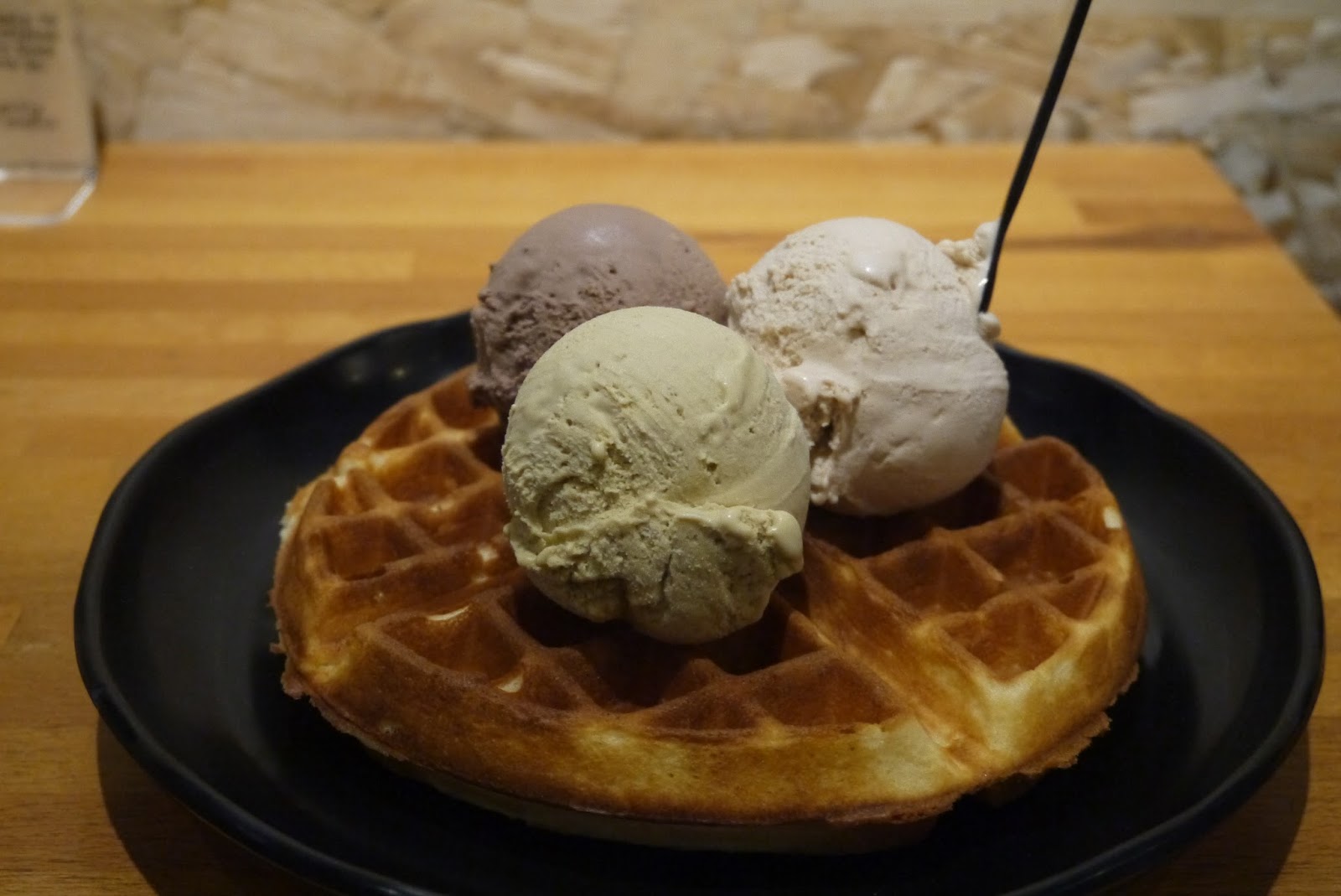 Featuring their signature favourite flavour: Pistachio, Hazelnut and Bascio Hazelnut (Chocolate with Hazelnut). The waffle served warm with crispy outer layer, it tasted really good with soft creamy gelato which melted in mouth all together.. So heavenly! 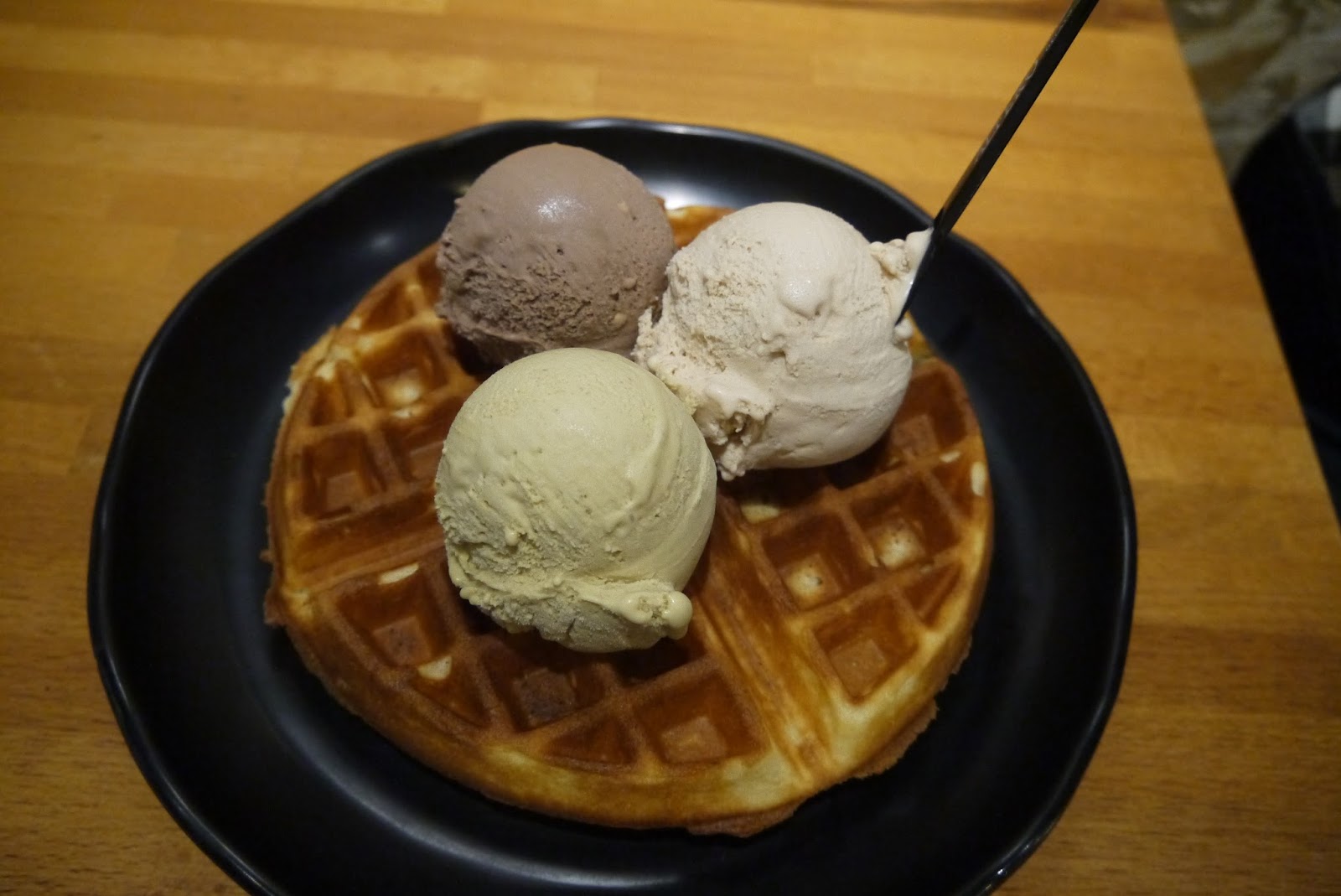 If you are a durian fans, you shouldn’t miss this Durian Gelato. Hmmm, because i don’t eat durian, so my friends had this gelato, they opinion said the durian is really thick, like eating pure durian.. 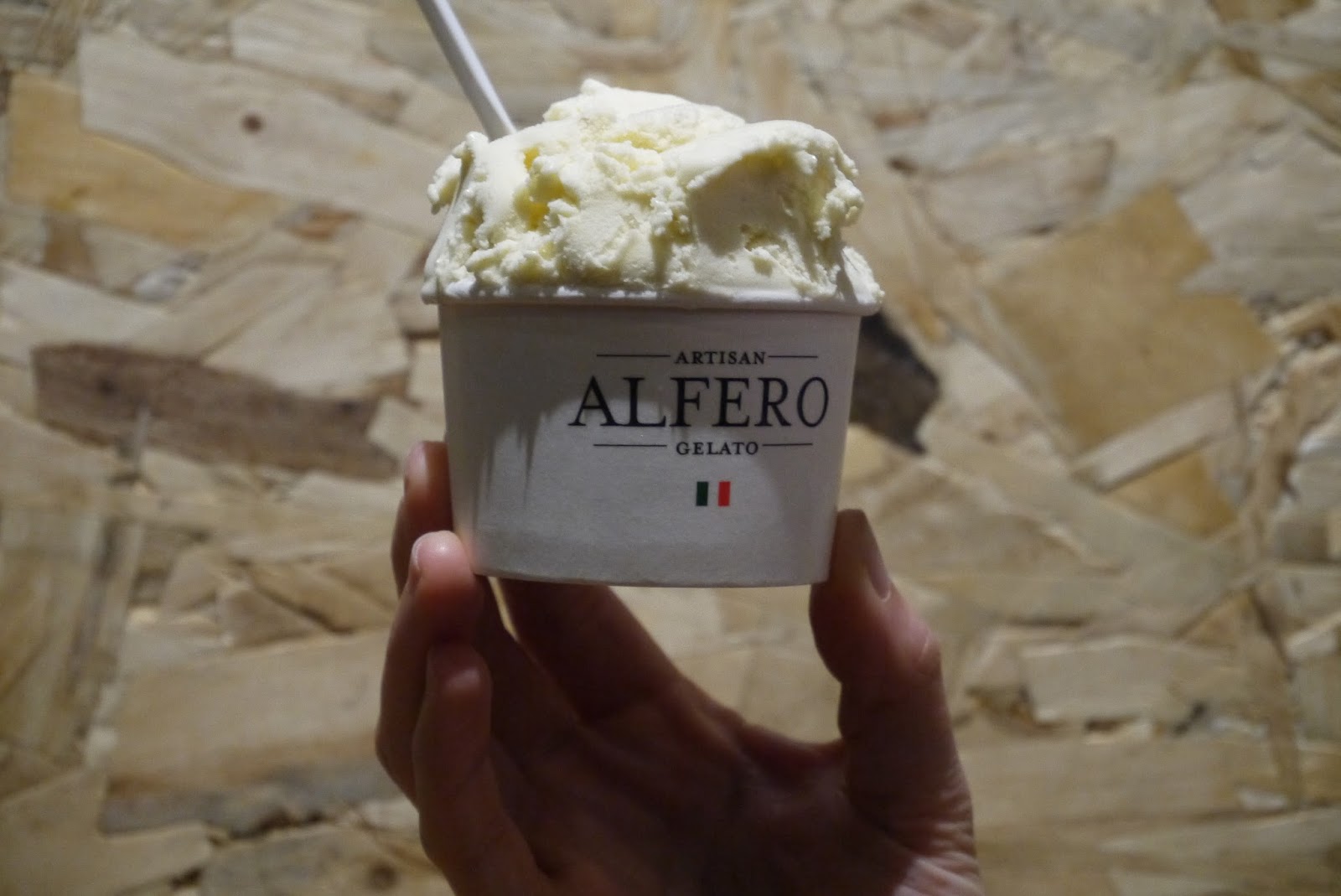 And if you prefer light flavour, you can have some fruit based gelato. Featuring Alfero’s Apricot Gelato, with appealing orange-gy colour, served on a cone. 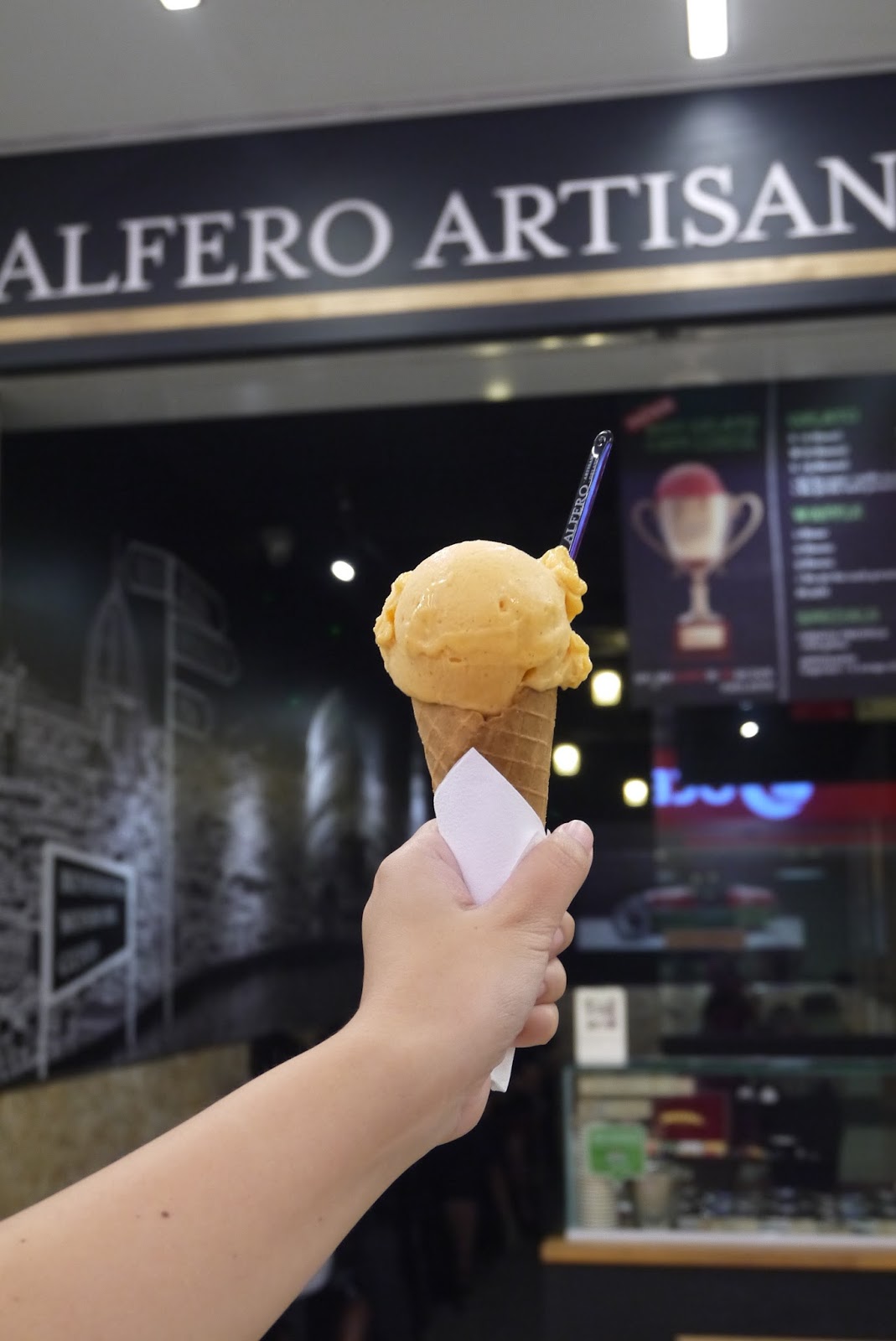 Have you ever taste Tiger Beer? Yep, if you like them, here they go.. Alfero Gelato also having Tiger Beer flavour, it was surprisingly taste good and really smell and taste like beer. 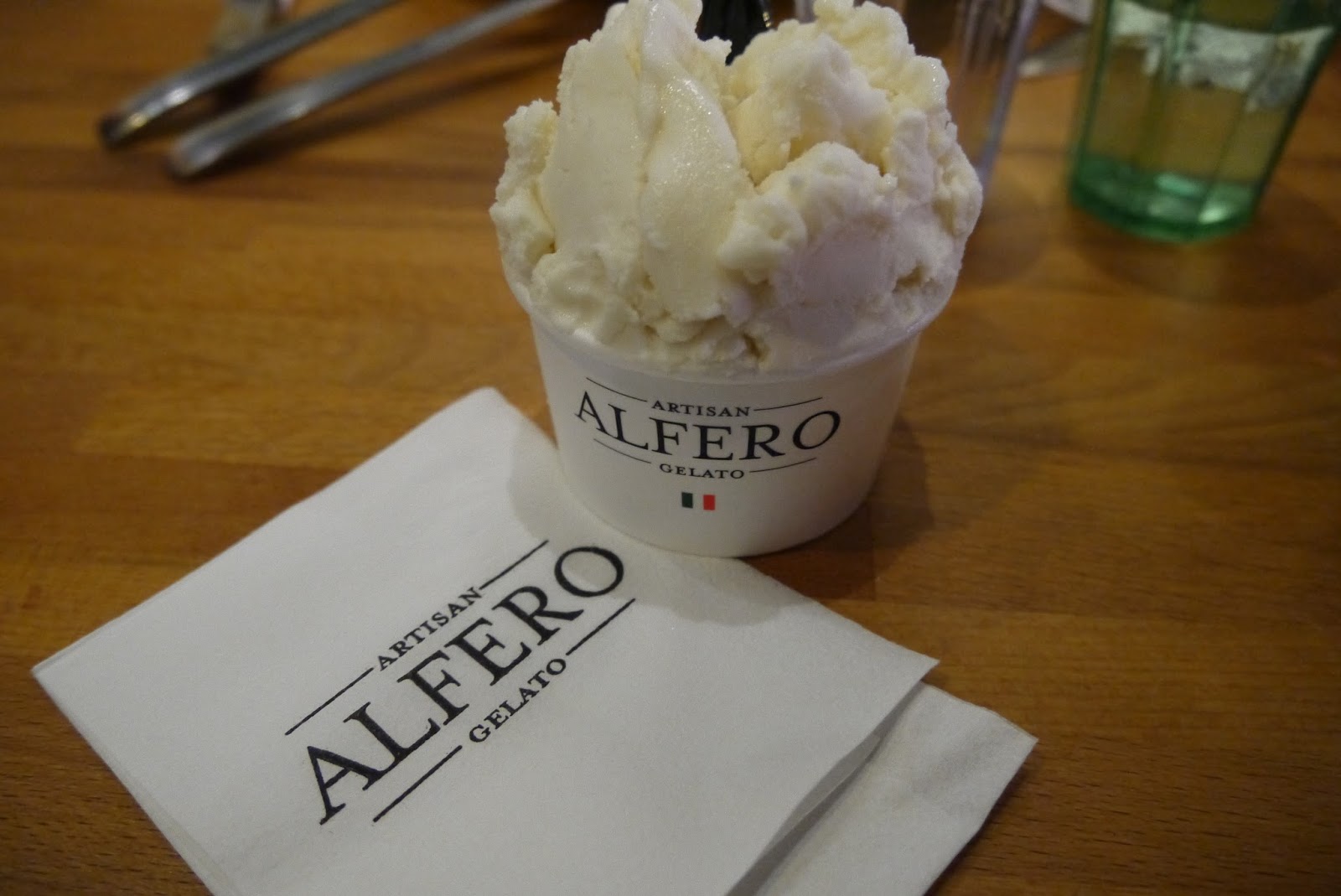 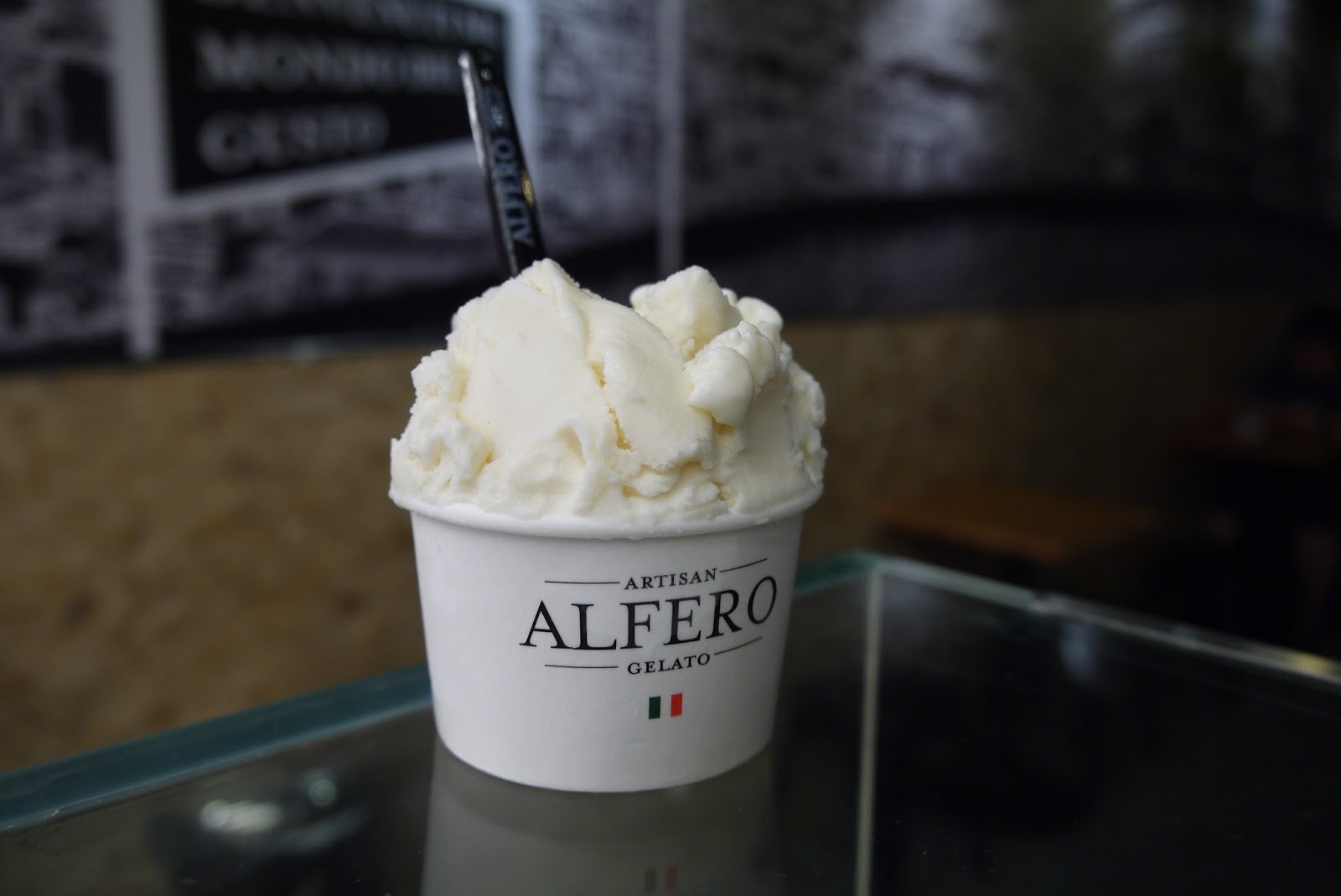 And this is one of my favourite from Alfero Gelato: Avocado Gelato! It taste really refreshing avocado, not too creamy, but just nice. Served together with Blood Orange Gelato which is resembles pomelo flavour. 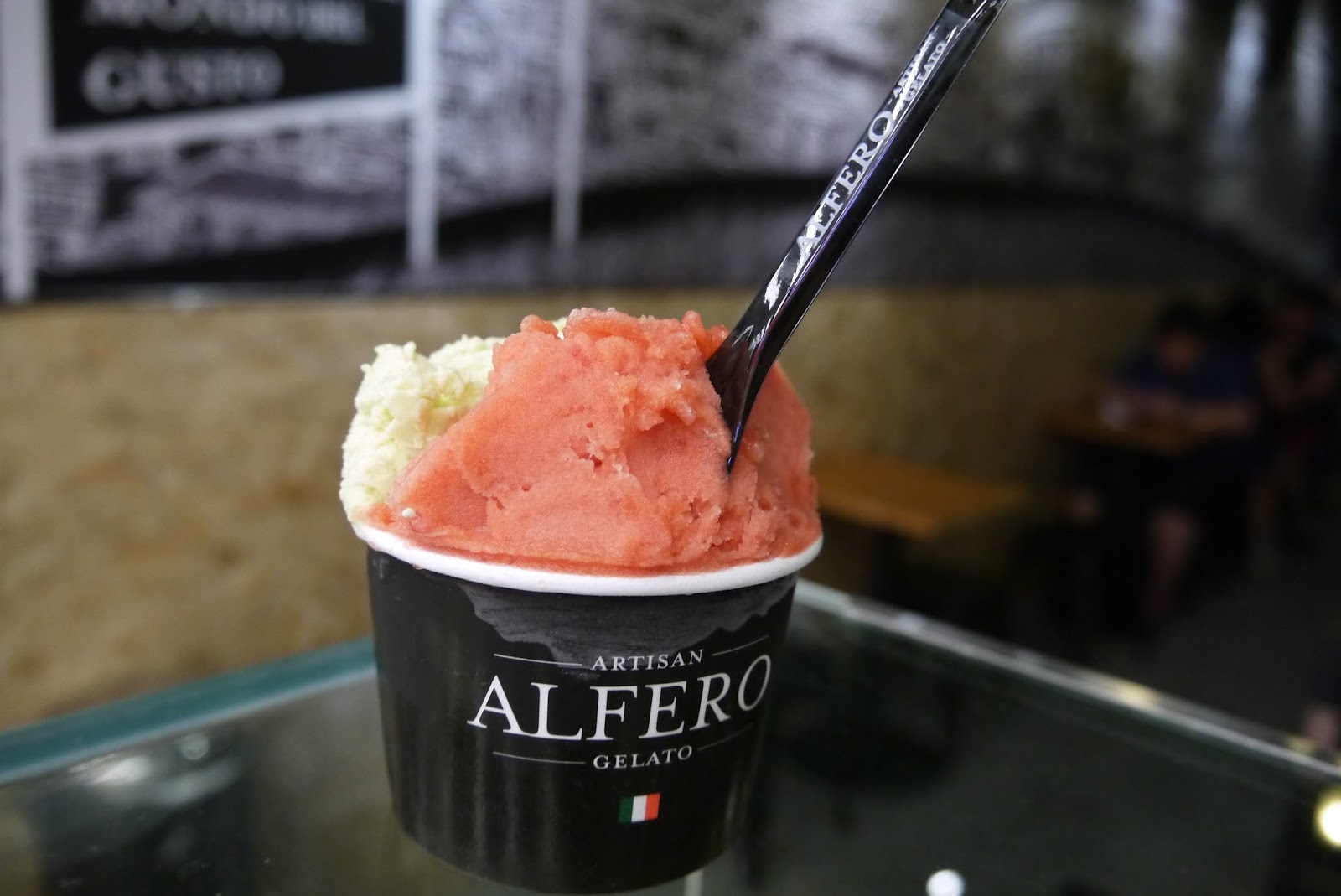 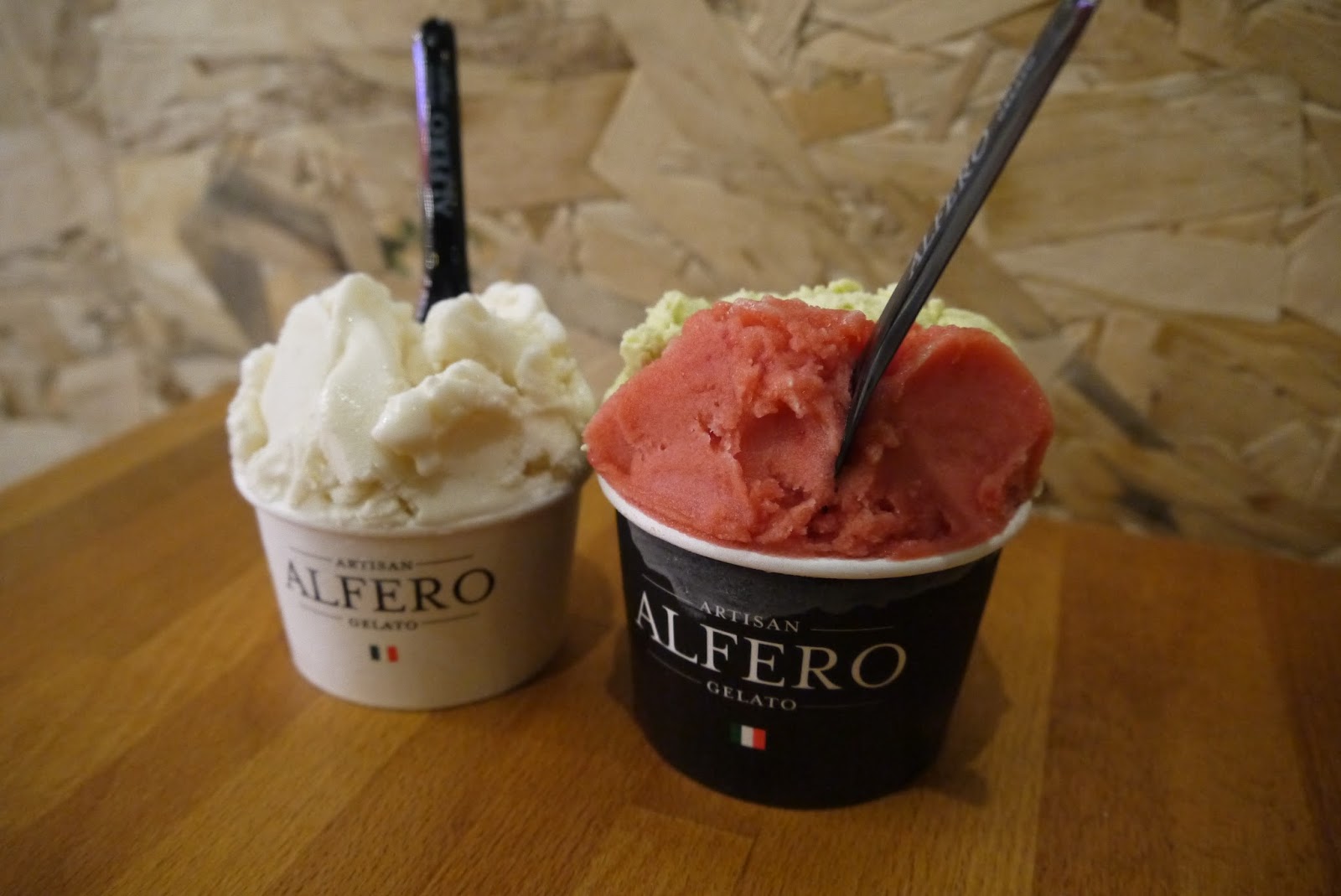 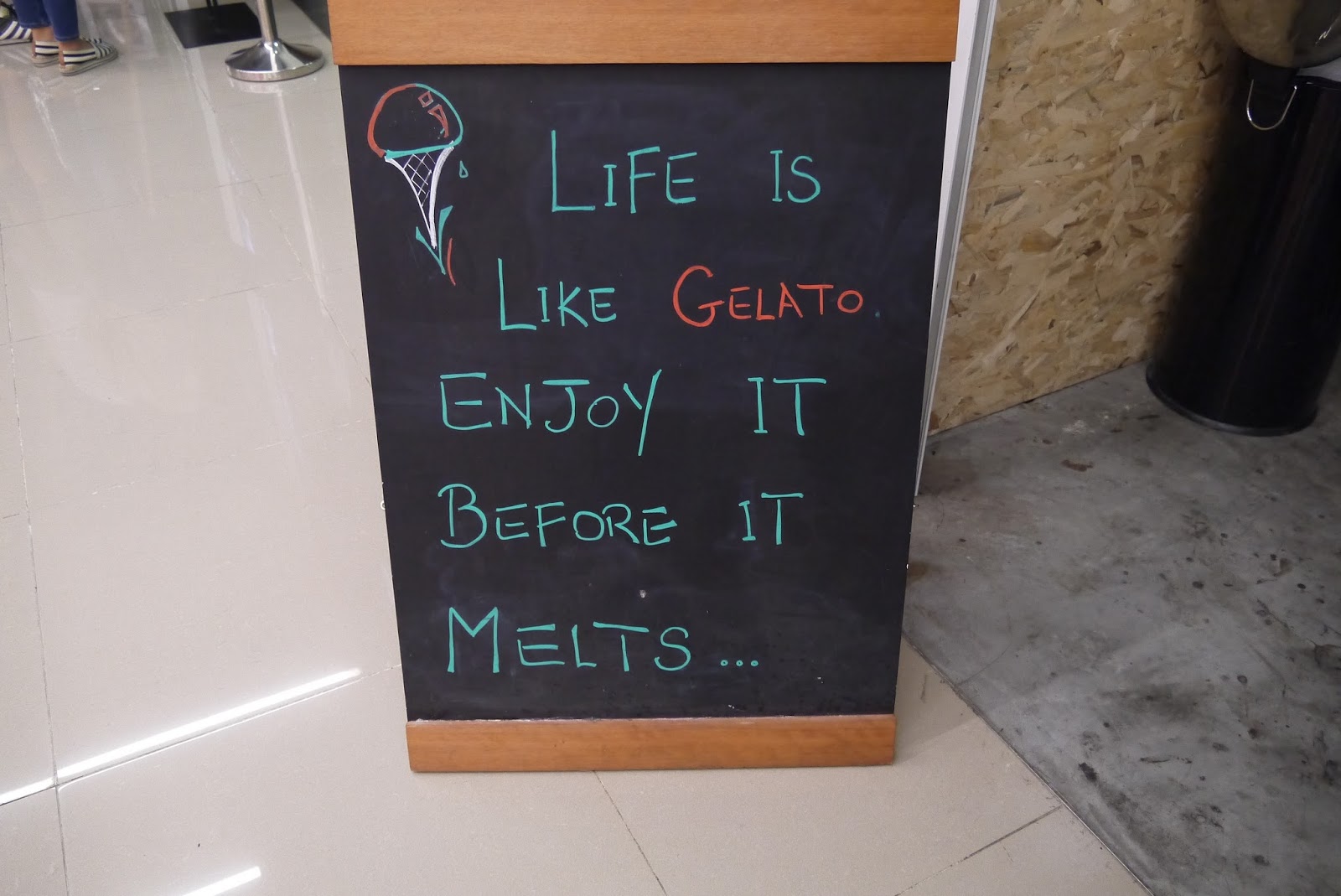 What i really surprised about Alfero Artisan Gelato is how they blend with locals here by having local favourite flavours, such as durian, avocado, Tiger Beer and even chendul gula melaka.. Thumbs up for this.
About Marco Alfero
Marco worked as a finance manager in the semiconductor industry for more than 10 years, before his love for gelato got him enrolled into the prestigious Carpigiani Gelato University, opened by the world-famous ice cream machine maker of the same name. His stint at the university taught him everything he needed to know in order to realise his dream as a gelato chef.
He visited Singapore once several years ago before falling in love with the city-state’s weather, greenery and conducive environment for business. He also noted that there was a demand for true-blue Italian gelato and thought his newfound knowledge on gelato-making would be put to good use here.
“Adoro il gelato, lo vuoi anche tu?”
ALFERO GELATO is conveniently located at:
• 81 MacPherson Lane #01-37
• 6 Raffles Boulevard #02-226A/B Marina Square
• 277 Orchard Road #B2-06 orchard gateway
Website: http://alferogelato.com

I’ve been using @neutrogenasg products for my se

[GIVEAWAY] To All Moms because YOU deserved the g

Recently just did my hair makeover at @salonmosche